Visit the site of one of the largest Civil War engagements in Loudoun County at Ball’s Bluff Battlefield in Leesburg, Virginia. Visitors can take advantage of weekend guided tours from April through November, volunteer guided programs and living history events (weather permitting). Brochures are available year-round for self-guided walking tours of the park. Major sites at Ball's Bluff include a cemetery, which is the third smallest national cemetery in the United States. Ball's Bluff Battlefield Regional Park also features an interpretive trail, signage and an amazing view of the bluff itself, overlooking the Potomac River.

Park gates are open, and the park itself is open for walking/hiking/self guided tours from dawn to dusk. No guided tours are scheduled at the current time. Please follow proper social distancing protocols and obey all park signs. Please take all trash with you when you leave. 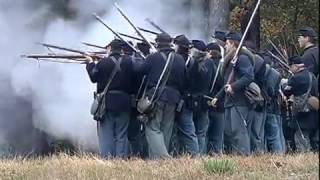 Bring the battle of Ball’s Bluff to life as you take visitors back to October 21, 1861 when the North and South clashed on a bluff overlooking the Potomac River, just three months after the 1st Battle of Bull Run. Volunteer battlefield interpreters share the history of this daylong battle with guests of all interest levels and for groups of school children and adults.

Training will prepare you to offer weekend and weekday tours, ranging from a 45-minute general introduction to the battle to a 90 minute in-depth tour. Interpreters must be able to walk a moderately difficult terrain while talking to visitors.

The Friends will complement, contribute to, support, encourage the use of, and promote the historical interpretation and environmental conservation of the battlefield park. Membership is open to anyone who has an interest in historic preservation and the purposes of the Friends. Annual dues are $20 per person.

Your membership dues go directly to the preservation of the Battlefield. As a member you are invited to participate in workdays, fundraising opportunities and other special events. Use the button below to join the Friends group now.

This was one of the first battles of the war

This was one of the first battles of the war. It was relatively small - only about 4,000 soldiers involved - but the story is well told through placards placed around the small area of the battle. You'll also see the small cemetery with 24 graves where 54 of the battle's Union casualties are buried. This is the 3rd smallest veterans cemetery in the United States.

Outstanding battlefield park. Excellent trail along the Potomac River. The trail is difficult in some places. With luck you see a deer. Small National Cemetary is part of the park. Highly recommended.

Civil War battlefield. Beautiful and serene. Easy access to the trail that leads to Balls Bluff National Cemetery and an amazing view of the Potomac River from the Bluff Overlook. We walked along the river and the towering bluff. In the spring, the ground is covered with spring flowers. I enjoyed seeing a carpet of Virginia Bluebells.

Photos from our Guests

Next stop: Ball's Bluff! One of the best parts about working from home is slipping out for a quick round of exercise, and Ball's Bluff is a great place for a jog! (One of my favorite hobbies!)If your hobby interests are more historical, Leesburg is

Next stop: Ball's Bluff! One of the best parts about working from home is slipping out for a quick round of exercise, and Ball's Bluff is a great place for a jog! (One of my favorite hobbies!) 👟👟👟 If your hobby interests are more historical, Leesburg is an absolute gem for any history buff. How cool is it that there are actual Civil War battlefields in the back of a neighborhood... literally in someone's backyard?! ⏩⏩ Swipe to see more pictures ⏩⏩ #ThisIsLoudoun #BallsBluff #AmericanCivilWar #HistoryBuff

can i get some cannonball wound ointment?

can i get some cannonball wound ointment?